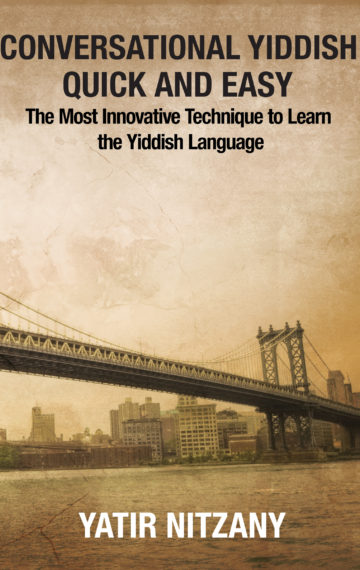 Written with Hebrew alphabet characters, Yiddish is a High German language that was used by Jews from central and Eastern Europe before the Holocaust. Most likely beginning around the ninth century CE, Yiddish was developed over the course of several centuries by Ashkenazi Jews in the Holy Roman Empire. Yiddish combined a Germanic language base with some Aramaic, Hebrew, Slavic, and even a smattering of Romance language words to create a distinct patois that served to unite diverse Jewish populations in Europe following the Diaspora. As Jewish communities grew in Europe, the Yiddish language grew with them, eventually including as many as ten to thirteen million speakers. However, the deaths of six million Jews in the Holocaust and the subsequent dispersal of Jewish communities following World War II decimated the ranks of Yiddish speakers in the twentieth century, and currently, it is estimated that as few as two million people worldwide still speak Yiddish. Nonetheless, some Yiddish words have been absorbed by many of the languages with which Yiddish cultures interacted following World War II (including chutzpah, glitch, kitsch, klutz, kosher, schtum, schmooze, and verklempt, among others, in English). Today, the language is enjoying a resurgence in Hasidic Jewish communities where it is the primary language spoken.

“I tried to learn Yiddish with teach-yourself books in the past, but didn’t succeed much. However i did find this book interesting and motivating. Very good to teach those on all levels of Yiddish and best of all it makes learning to speak the language easy. My Yiddish grandmother and my other Yiddish relatives love the book as well, whom I am now able to communicate with much better thanks to this book.” – Yoni

“I run an adult home health care facility and many of my patients speak Yiddish. This book definetly helped me converse with them in Yiddish, and they were surprised to how well I know how to speak it now.” – Ernest