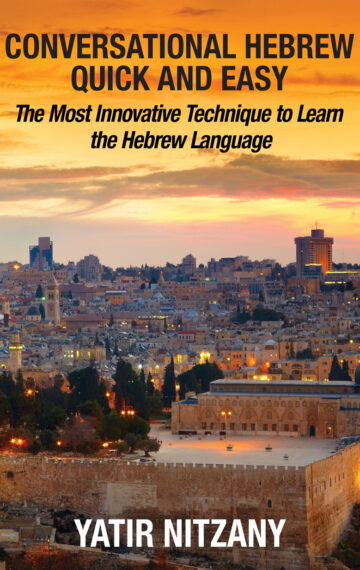 The two most ancient written cultures in the world (other than Egyptian with its hieroglyphics) are Chinese in the Far East and Hebrew in the Middle East. Abraham, the father of the three monotheistic faiths, was the first person to speak Hebrew, and the book to introduce his story is the Bible. This awesome literary work covers thousands of years of history, and the book is translated into 126 languages. Hebrew further developed from generation to generation, and its vocabulary became more extensive.

For three millenniums, great works of Hebrew scholars were written in Hebrew and translated into many languages; works such as the Mishna, Talmud, Haggadah, and Derash. Great philosophers, such as Saadia Gaon (around 800 C.E.) and Rabbi Moses Ben Maimon—known as Maimonides—in the twelfth century, also wrote their philosophies in Hebrew and Arabic (the lingua franca of this historical period). Their works were then translated into Latin and many other languages. In the medieval era, there were well-known scholars, poets, and authors in Spain, such as Yehuda Halevy, Iben Ezra, Iben Gavirol, and a large number of other writers who expressed themselves in Hebrew.

The Torah, known as the Five Books of Moses in the Bible, was translated into a more comprehensive Hebrew with commentaries by Rashi (a famous rabbi). His native language was French. In the Enlightenment era, since the great Jewish philosopher Moses Mendelssohn, as well the national poet of Israel, Hayim Nechman Bialik, who expressed himself in the most eloquent Hebrew, creating and adopting it into a modern language and creating new words. Ben Yehuda, who wrote the modern Hebrew dictionary, together with hundreds of writers and superb poets, such as Shaul Tchernichovsky, left an exquisite legacy of literary works in Hebrew. Yet for none of them, Hebrew was their mother tongue. At that time, the language was considered a dead language. In 1969, Shay Agnon was awarded the Nobel Prize in literature. He wrote in Hebrew, and most of his books are translated into many other languages In America, from the Pilgrims’ times until 1929, no student was accepted into any Ivy League University, such as Harvard or Yale, unless they read and wrote Hebrew. Most Ivy League universities in the US have a Hebrew Department for Biblical history and the literature of Hebrew scripts. Nowadays, even at the Universities of Tokyo in Japan and Seoul in South Korea, there are Hebrew departments where Hebrew is taught.
In Israel, where the Hebrew language is the national language, there is the Academy of the Hebrew Language, which assists new learners of the language anytime.

“A trip to Israel is in my near future! Thanks to this book, in less than 20 minutes a day, I have the basic vocabulary skills needed to communicate with the locals there. This book is perfect for any American that wants to learn Hebrew. Easy to follow, and very well written.” – Paul

“This book is well organized, quick, and easy. At least, as easy as embracing a new language CAN be. I am learning Hebrew using a variety of sources (Rosetta Stone, flash cards, online tutorials, TV, and my native-Israeli partner), and bought this book as another arrow in my multi-faceted quiver. I will say I’ve been impressed. Most of this was not new to me, but I believe the way it’s presented is extremely useful. It doesn’t necessarily seem logical at first glance, and I probably would have been frustrated had I not seen such a variety of approaches in teaching/learning a new language. Having gone through so many learning methods, I do believe this is a reasonable and logical approach. ” – T. Scot